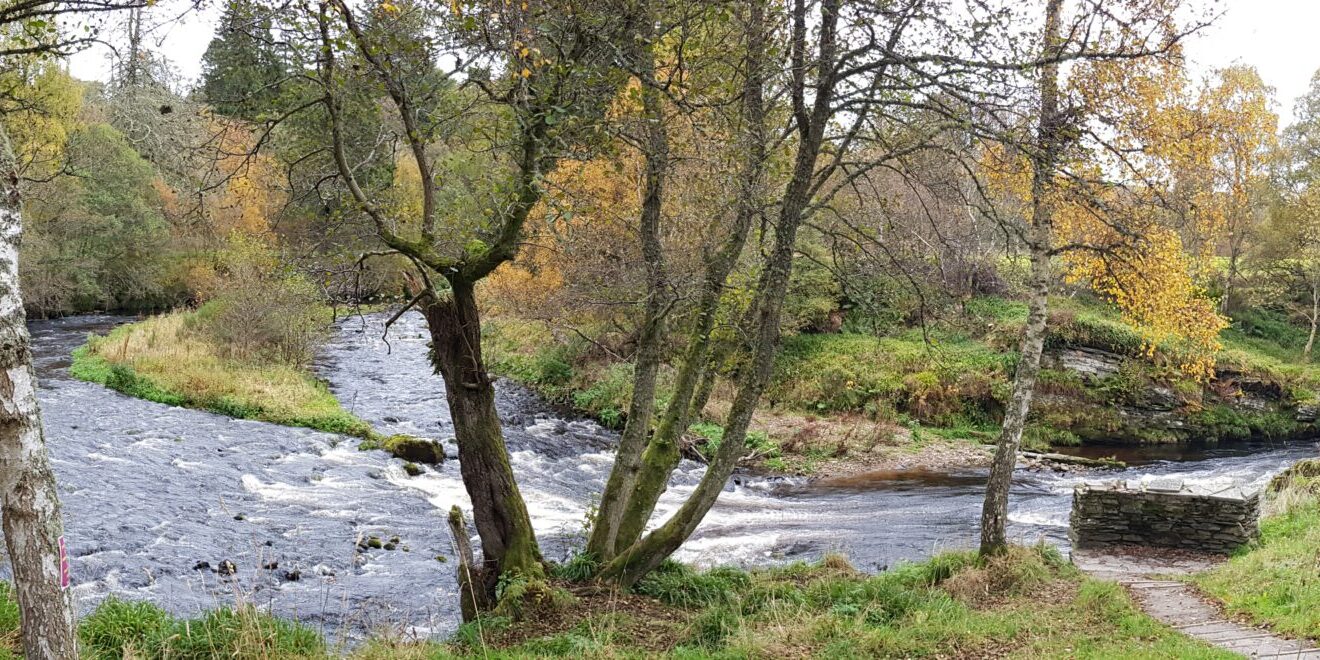 Autumn is in full flow here and so are Speyside Whisky Tours. The leaves are turning from their verdant summer hues to more Autumnal golden reds, browns, and oranges. Whilst it may not seem the ideal weather for a ‘roaming in the glens’ it certainly makes an ideal time for a distillery visit (or three). As the summer season closes its doors and the numbers of visitors reduces for another year, we still have some wonderful scenery and places to visit here in Speyside.

So thought three German guests recently who took advantage of the quieter period to visit. Specifically for Whisky Tours throughout the Speyside region of Scotland and to broaden their knowledge of single malt whiskies. With this in mind Simply Speyside put a tour together to show some of the lesser known distilleries alongside the better known ones.

First stop for their Speyside Whisky Tour was The Glenallachie Distillery. Originally built in 1967 by Scottish & Newcastle Breweries’ distilling subsidiary, Mackinlays. The distillery changed hands several times until in July 2017. When it was announced that Chivas Brothers would sell the distillery to The GlenAllachie Distillers Company. The new owners relaunched The GlenAllachie as a distillery known for its ‘big’, fruity malt whisky. Six single cask bottlings were released in April 2018, with GlenAllachie’s first core range of single malts launched in June 2018. A great wee tour of the distillery ending with a tasting of three great drams from their core range.

Then The Glenlivet one of our more remote distilleries. The Glenlivet is perhaps one of the lesser known big brands, but still it’s a fine distillery and one that never ceases to impress. A tour here is an enjoyable hour and a bit with a cask strength dram drawn straight from the cask halfway through the tour which concludes with a great tasting of 3 drams in their amazing tasting room.

Keen to keep the mood of contrasting distilleries we then took in Cragganmore.. An absolute gem of a distillery and their core range is one of the finest you’ll fine in Speyside. Exciting news is the release of their Cragganmore 12 (SR 2019) a peated (yes peated) Cragganmore and at cask strength as well (58.4% Vol).

A quick ‘drive by’ of the Speyside Cooperage was next on the list, no tour unfortunately but amazement from our guests when rounding the corner they were confronted with a view of more casks than you can shake a stick at. The Speyside Cooperage make / repair over 100,000 casks a year. So if you want to know your barrel from your hogshead or your butts from your puncheons this is the place with the answers.

No tour would be complete without at least a view of the new Macallan Distillery. Described as many things it is a new wave in distillery design and was shortlisted for the RIBA Stirling Prize. The tastings here are amazing as you relax in The Macallan Bar you are treated to one of the best selections on Macallan whisky available anywhere. As well as beautiful panoramic views of the surrounding hills of Speyside.

SimplySpeyside Tours has a lot more to share and we’ll keep you up to date with things. However we appreciate your time taken to read this blog, and please watch out for further blogs about our adventures.

What flavour do Speyside whiskies have?
20 May 2019
Go to Top
We use cookies on our website to give you the most relevant experience by remembering your preferences and repeat visits. By clicking “Accept”, you consent to the use of ALL the cookies.
Cookie settingsACCEPT
Manage consent

This website uses cookies to improve your experience while you navigate through the website. Out of these, the cookies that are categorized as necessary are stored on your browser as they are essential for the working of basic functionalities of the website. We also use third-party cookies that help us analyze and understand how you use this website. These cookies will be stored in your browser only with your consent. You also have the option to opt-out of these cookies. But opting out of some of these cookies may affect your browsing experience.
Necessary Always Enabled
Necessary cookies are absolutely essential for the website to function properly. This category only includes cookies that ensures basic functionalities and security features of the website. These cookies do not store any personal information.
Non-necessary
Any cookies that may not be particularly necessary for the website to function and is used specifically to collect user personal data via analytics, ads, other embedded contents are termed as non-necessary cookies. It is mandatory to procure user consent prior to running these cookies on your website.
SAVE & ACCEPT